So, here I am. Sitting on a plane, hovering precariously via the power of science and hope, over a place called the Charlie-Gibbs Fracture Zone. Sounds fantastic.

How’d I get here? Why am I up here? What am I doing here?

I can try to answer those questions.

How did I get here? I decided, on a whim that I wanted to be up here. I decided that I didn’t want to be where I was, that I wanted to be somewhere else. A lot of you are reading this after having seen a somewhat…startling post on Twitter or Facebook last night. Well, sorry for that. Maybe I’m just trying to show that I can pull off a solid abrupt departure, too.

Why am I up here? Ah, that’s the question that I don’t care for. I’m up here because I lost something. You know the scene in Temple of Doom, where Mola Ram puts his fingers on a guy’s chest and presses in? Well, think of the result of that scene, only with more paperwork to deal with after. At least that guy had an idea of what was going on, the bastard.

So, yeah. I’m here because life has been total emotional shit for me for the last…hell, damn near five months now. Life gave me lemons and I wasn’t allowed to give them back, never mind anything else. I won’t (nor do I desire to) get into the full details of the situation. Suffice it to say, things happened, I moved back in with my parents, and that was that. Hooray for being vague!

So I had my time to mope – which I still do. I just do it less. I focus my energies into other things now.

I was forced to step back and take stock of what was going on in my life. I had to think deeply about what I’m doing, where I’m going, and where I’ve been. I do have some regrets about my previous life (regrets which led me, consequently, to this life), I hope I can learn and rebuild who I am to regain my former self and situation.

What the hell am I doing here? Well, part of me says “your guess is as good as mine,” and the other part of me is saying “I have no idea.” I’m trying to make something of myself, something I can be proud of, like I used to be. I’m starting this blog to get an idea of what I’m doing, while I’m doing it.

Here’s a quick Coles Notes rundown of my situation:

In 2008 I lost steady use of my right eye. I’ve been blind in my left eye since I was seven, so you can imagine that having the other eye go to hell kind of sucked. Well, imagine no more, fair reader! I’m here to tell you the God’s honest: it did suck. I had three surgeries over the course of two years, after which I regained a somewhat functional level of vision. I used to love driving, but now I can’t. Reading, too. You know what? I liked seeing in general. It is pretty awesome.

But losing the vision took a huge toll on me. More than I knew, more than those close to me knew, more than the one closest to me knew. I became anggry at the world, I was taking it out on the people around me, I was pretty much a giant ass. I didn’t mean to be, to let it affect the ones I care about most, but it happened.

I got a little better. I began to cook, to take transit (eventually), I became a barbecue master. But it took so long for me to gain the confidence to do any of these things. Months…years, in some cases.

I’m sure you can figure out the rest of the sequence of events. I…no, we, became a statistical inevitability. I couldn’t be who I needed to be because of life changes, finance, and depression. After what I’d say was easily the worst time of my life, I went to meet with a counsellor. I did it on the suggestion of a very good friend, and I’m incredibly glad I did. I learned a lot about myself, how I’m living my life, and how it affected others.

I was lost, a sort of PTSD funk that I slipped into. I didn’t care about anything. I didn’t want anything but my old life back. Honestly, I still want it back. Why wouldn’t I? But I have to move forward, if I can’t move on. During the last few months I’ve lost nearly 20 pounds – which isn’t entirely a bad thing. Want a lose-weight-quick solution? Have a soul- and heart-crushing separation. The feeling that you could have done something, but didn’t know you could will melt the pounds right off of you!

But, I digress. (Note: if I can make a quick aside, remember this: relationships need communication. On both sides. Lots of it.)

“Quick Coles Notes” my ass. Sorry about that.

I was told by more than one person that I should play to my strengths and things I enjoy. Well, my strength, which I feel I can say without much cockiness, is writing. And I enjoy travel. Therefore, I’ve combined them.

I began writing this post while on the plane, somewhere over Newfoundland. I’m now finishing it on an antique couch. There’s a grumpy French guy over to my left, some chatty Germans to my right, and a few Portuguese thrown in for good measure. It really is a terrible language, though.

I just wanted to get this down as a sort of “what the hell is going on?” post. I know I didn’t mention the trip to a few people, and I’m sorry about that. I wanted it to be a surprise, a shock to people. I’ll start another post about the day’s events proper.

And if they do, they’ll soon forget/

’cause it won’t take much for me to show them my life ain’t over yet.” 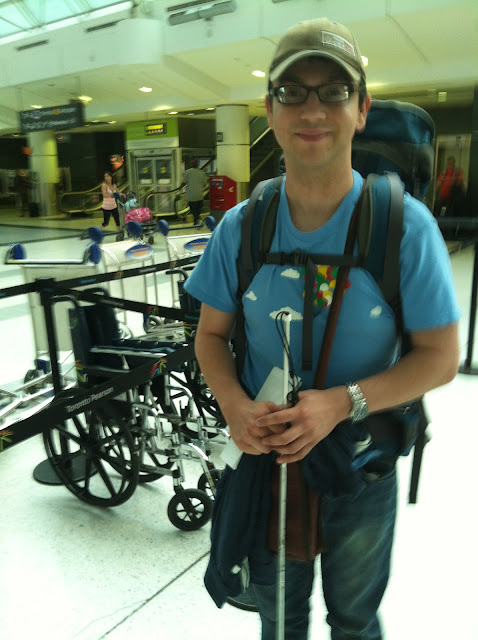