Skip to content
What do we take away from travel? I can
list the material things, easily. I bought two t-shirts at two breweries
(Guinness and Heineken); a sweater (H&M in Lyon, because I’m frugal and fashion-conscious); a Baker Street magnet from London…uh…I think that’s it, really.

Sure, I’ve got all your standard travel detritus: maps, ticket stubs, coasters. You know, all the crap you think you’ll need or want, and they just sit in a box under your bed.

I guess I bought a few things that aren’t
necessarily souvenirs. Stuff I needed, like an umbrella. What a piss-off that
was. Do you know, it rains up in Scotland! Like a schmuck I neglected to bring
an umbrella with me, and this particular day I’d left my rain jacket at the
hostel by mistake. So, just near Edinburgh’s Royal Mile (their main tourist
area and shopping street), I was huddled under an awning as it pissed down
cold, fat drops. People inside the shop across the street were laughing at me, I’m sure of it.

I had a peek at my phone and found some touch-and-go Wifi from
a nearby Starbucks. I managed to pinpoint a nearby Boots (basically a Shoppers
Drug Mart or CVS-like shop). When the rain let up a bit I tore off in the
general direction. Seeing the blue-and-white blur of a sign, I burst in,
shaking off the wet.
There I was, “that guy.” The unprepared
tourist. I hate that feeling. I have a look about the store – surely, there
must be umbrellas there.
Right at the front, they were. I picked one
up, black, light, compact. I didn’t even think of looking at the price. I just
wanted to buy it and leave.
£14. For Christ’s sake.
The lady at the counter was sympathetic,
but I could tell there was a bit of schadenfreude in her smile.
After doing a shame-walk out of Boots, I
immediately discovered an entirely new problem: how the hell am I supposed to
use both my cane and the umbrella? I pretty much
need a free hand when I’m getting around. Finding railings, hitting the button
to cross the street, whatever. I like having a free hand.

Behold, my fresh hell
of what I call the Edinburgh Dual-Wield. Cane to the ground, umbrella to the
sky. God help me if there’s a light breeze.
Eventually I’d resort to almost wearing the
umbrella as a hat. I’d prop the umbrella on my shoulder, like a soldier
presenting arms. I felt like Dark Helmet from Spaceballs. You never want to feel like Rick Moranis, I assure you. When’s the
last time you’ve seen him in anything? Exactly.
So, that’s what I mean about souvenirs of
necessity. Well, I’m lying. In Berlin I let someone use it, being a nice guy. Then someone never gave it back. Then someone accidentally
took it back to Australia.
You owe me an umbrella.
But, anyway, as the cliché goes, the true souvenirs
are the memories. I came back with around three thousand photos. Many were shit, sure. Lots of pictures of store signs and train departure boards. But there they are, souvenirs in their own right.
Aside from the obvious memories and photos,
there is one souvenir that stands out.
A lot changed for me up in Edinburgh. I
won’t go into what, or why. Not really the time or the place. But suffice it to
say, Edinburgh is where my year started to get a lot better. I met a ton of
truly unique people and it was the first place that was unknown territory for
me at that point.
I’d met a few people at Caledonian Backpackers. As it happened, one of them I’d end up traveling with
for extended periods, the poor bastard. But this isn’t about him – I could, and
may, write an entire post about Tim.
No, some of the most memorable meetings are
the fleeting ones. This one afternoon I’d been introduced to a few different
folks: Alex, a clever engineer from California; Christian, a rather jovial guy
living in Montreal; and Kokichi, a young and happy traveler from Japan.
The reserved and smiling Kokichi was in my
room, two bunks away from mine. Thanks to some Australians also in the dorm, we
were all duly introduced as loud and happily as only an Aussie can. At one
point it came out that Kokichi did origami, and he showed us some. He had this
beautiful, colourful origami paper with him, and I suppose he’d had it for
something to do on trains, whiling away the slow hours.
It was decided that a bunch of us would go
for dinner. So, Kokichi, Alex, Christian, and myself went across the road to
Ryan’s Bar, at the crux of Queensferry and Hope (not “Hoop”) streets. We shared
conversation over pints and heavy meals of lamb, potatoes, and all manner of
steamed vegetables.
We had a grand old time. We decided to keep
it going. Since Edinburgh is relatively far north, the sun told us that it was
still early, a fine time to head out for more pints! We wandered Edinburgh in
search of a particular pub, known to Alex and Christian. Turns out the pub,
BrewDog, is a craft brewery in of itself. They’ve got a small string of pubs
across the UK, and they make an insane variety of beer. We each of us picking
something different.
To be a beer ponce for a second, I had the
Libertine Black Ale. It was incredibly hoppy, slightly smoky, and smoothly
malted. It was like chocolate milk that hated being in your mouth, and that’s a
good thing. Maybe not my best description ever, but I’m sure they’d call it
apt.
As a group we shared one glass of a
particular beer. “Sink The Bismarck” is a 41% ABV (Alcohol by Volume) India
Pale Ale. Forty-one percent alcohol. They sell it by the dram, which means you
get maybe three ounces in a brandy snifter. It is, in fact, currently the
world’s strongest beer (named in retaliation of the Germans’ previous world
record at 40% ABV). It tastes more like a wildly hoppy scotch. It’s hot and
holds onto your tongue as you swallow. It’s incredible.
So, we all shared a glass of it. I recall
snippets from the rest of the evening, but perhaps understandably, not so
clearly.
We all went back to our respective places
that night. Oh, damn…I remember what happened with the rest of that night for
me. I recall putting on an English accent and called everyone “Arthur,” damned
if I can remember why. Different post. Anyway, as I said, we all went back to
where we started, and we crashed.
I dimly remember Kokichi saying he was
heading out the next morning. He was great fun, and the four of us had a great
night together. It was my first fully awesome night out in a very, very long
time. I owe the four of them a lot more than I can explain to them, because I
can’t really explain myself exactly what it did for me. It just…it just worked,
you know? Whatever it was, it worked.
The next morning I woke early. I used a
small wooden chair as a sort of bedside table. I reached over to it for my
glasses and I knocked something off the chair. I found my glasses and had a
look for what I’d dropped. It was still dark in the room, so I didn’t have much
luck seeing it. I groped around on the floor, when my hand grazed a bit of
paper. It was stiff, textured paper. Folded, angular…it clearly wasn’t a
receipt (of which I’d had a small collection from the previous night). I pulled
my phone out of my pillowcase and flipped on the flashlight app.
This is what I found, perched stoically in
my hand: 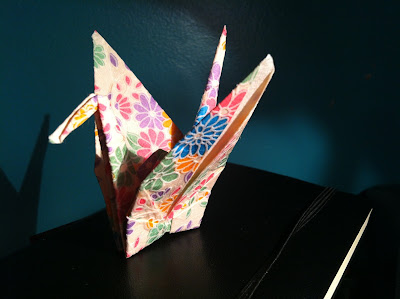 This guy, this little crane, means so much
to me. I don’t even know what, which may sound silly. There’s just so much
power, or feeling, or something held in eight
square inches of colourful heavy weight paper. I don’t believe in any higher
power or binding force or anything, but I do believe in emotion and human
feeling. This crane is a representation of that, of a sort of return to form
for me.
It is fragile, sure, but it survived three
and a half months longer in my backpack. It tucked neatly into the little pocket
inside my Moleskine notebook. It rode along with me through heat, rain, cold,
falls, airport security…tons of stuff. And when I’d get down on myself I’d
eventually pull out the little crane. There it was, beautiful and proud. I’d
gently tug its wings and it’d pop back into shape. I’d just sit there, looking
at it. I’d fold it back up, slip it into the notebook, and I’d be on my way
again. I still can’t explain exactly what it does to me, but I’m glad that it
does whatever it does.
Kokichi, thanks man. I owe you more than a
pint, but next time I see you, we’ll start with that. Cheers.
Por favor consulta el manual.